SPECIAL UPDATE from Governor Brian Kemp and the Georgia General Assembly about Georgia's fight against Coronavirus.

I personally feel it is important for folks to have a better understanding of the intensity of this virus. The people need facts and better intelligence is the only way to make appropriate decisions.

One week ago, I would have never imagined the decisions that have come from our leadership.

It is our moral obligation that District 1 is a leader and example for counties across the country to follow as this situation unfolds.

Prayers are needed for the Americans on the front lines of this pandemic. Please follow the instructions from your elected officials and our law enforcement.

ATTENTION: Share your ideas with Colton in the Northwest Georgia Quality of Life Survey, here. 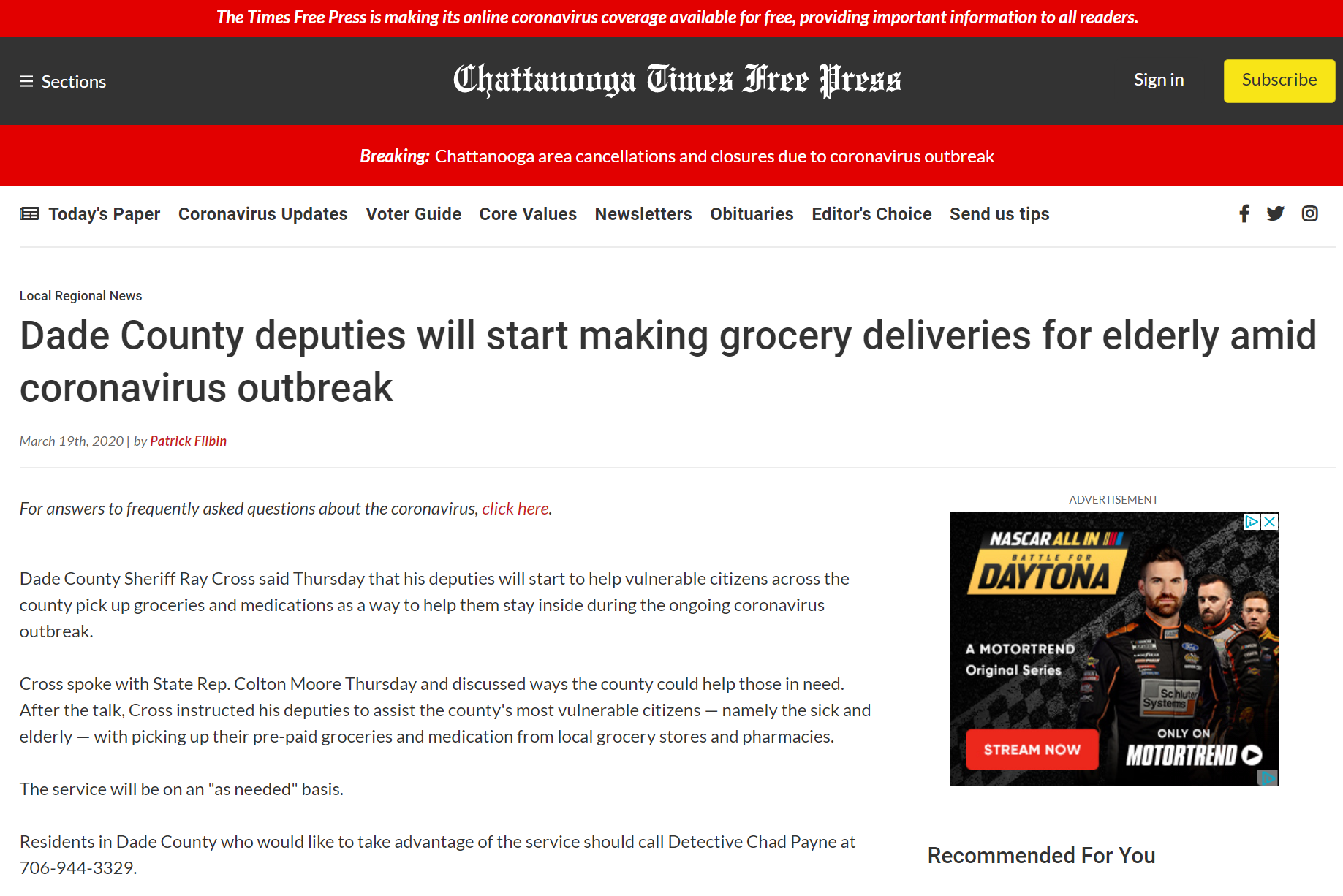 Dade County Sheriff Ray Cross said Thursday that his deputies will start to help vulnerable citizens across the county pick up groceries and medications as a way to help them stay inside during the ongoing coronavirus outbreak.

Cross spoke with State Rep. Colton Moore Thursday and discussed ways the county could help those in need. After the talk, Cross instructed his deputies to assist the county's most vulnerable citizens — namely the sick and elderly — with picking up their pre-paid groceries and medication from local grocery stores and pharmacies.

The service will be on an "as needed" basis.

Residents in Dade County who would like to take advantage of the service should call Detective Chad Payne at 706-944-3329. 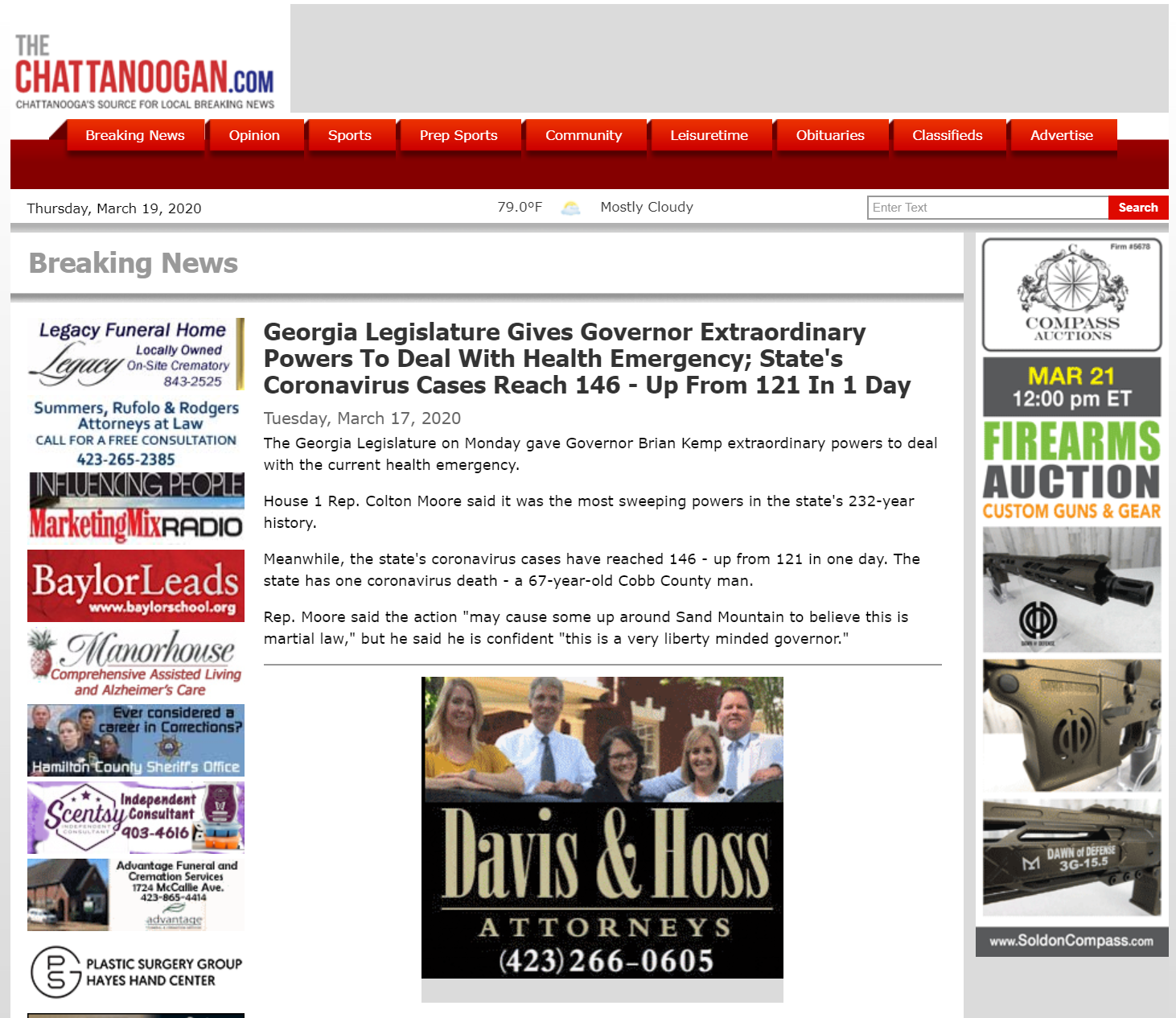 House 1 Rep. Colton Moore said it was the most sweeping powers in the state's 232-year history.

Meanwhile, the state's coronavirus cases have reached 146 - up from 121 in one day. The state has one coronavirus death - a 67-year-old Cobb County man. 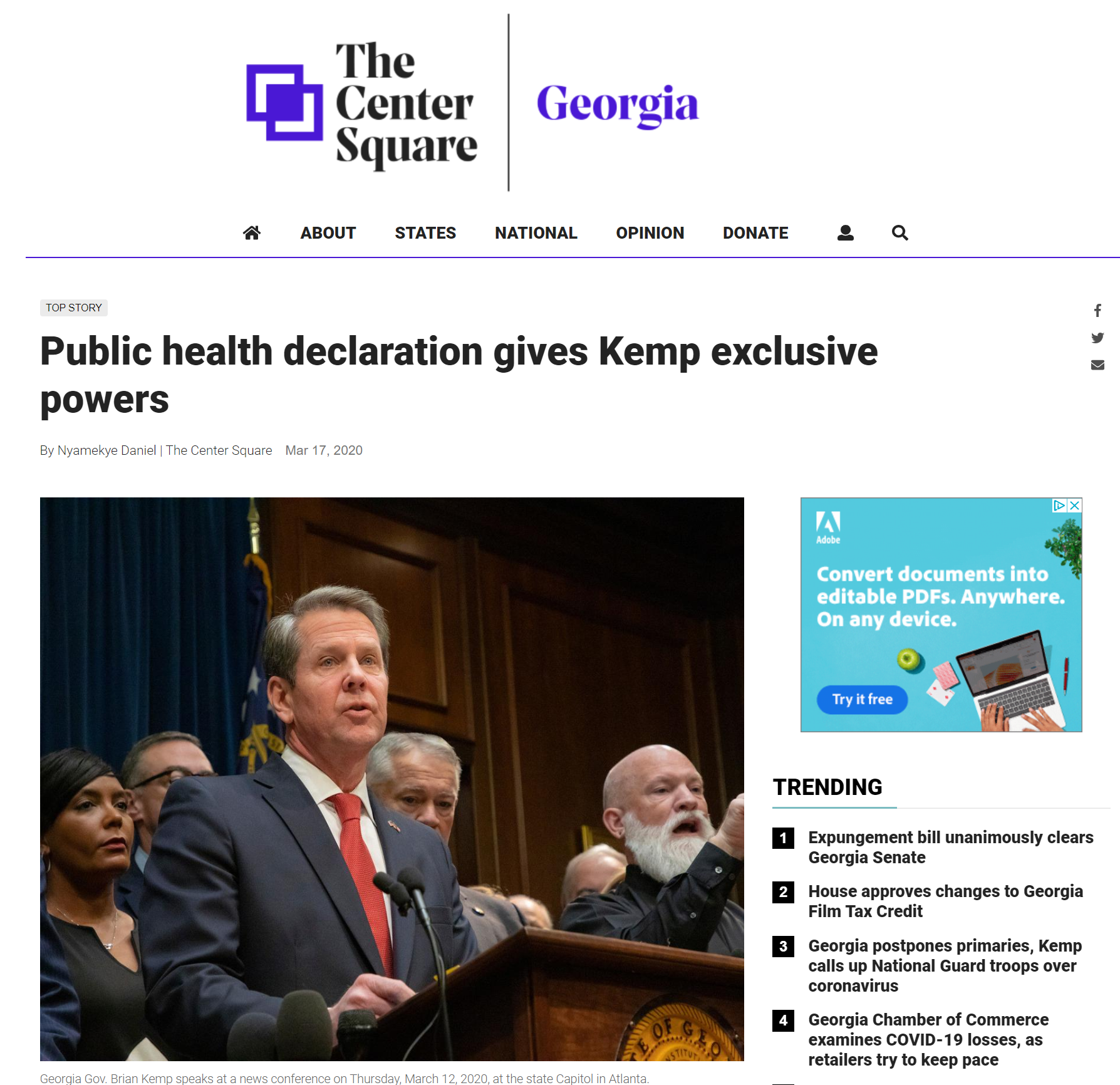 Kemp can renew the declaration without their approval in the event the health risk is too high before April 13, when lawmakers are scheduled to return to the state capitol in Atlanta.

“We didn't want to come across a situation where the governor would lose his emergency powers, and the Legislature would not be there to give them back to him,” Rep. Colton Moore, R-Trenton, said.

The Senate voted unanimously to approve the measure. Rep. Matt Gurtler, R-Tiger, was the lone member of the House to vote against it.

As of Tuesday afternoon, the Georgia Department of Public Health reported 146 confirmed cases of COVID-19 in the state, including one death. 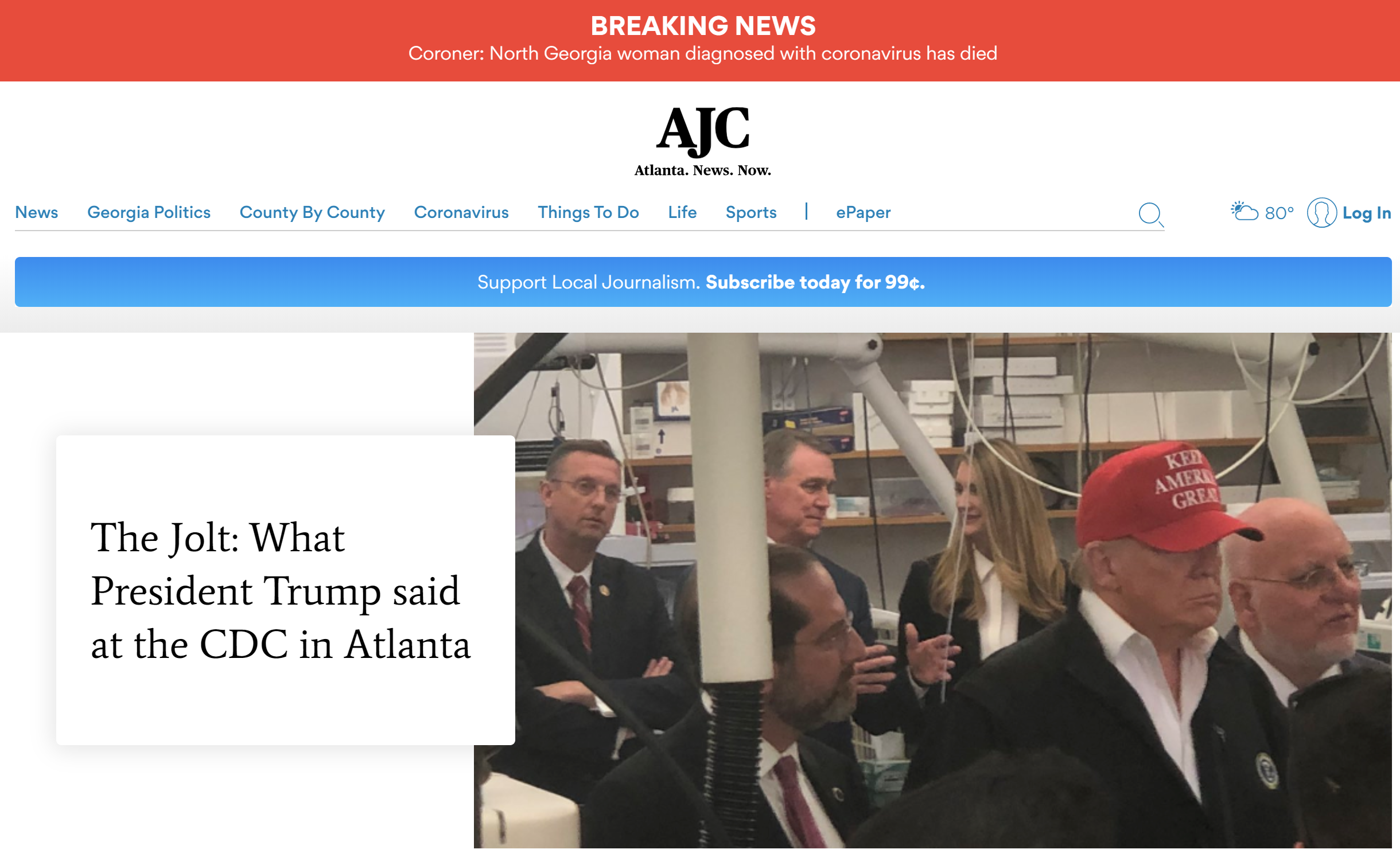 State Sen. Jeff Mullis of Chickamauga, one of the most powerful Republicans in the Legislature, drew a challenge from state Rep. Colton Moore, a first-term lawmaker who had recently flirted with a bid for Congress and recently sent a press release announcing his plans to leave public office. 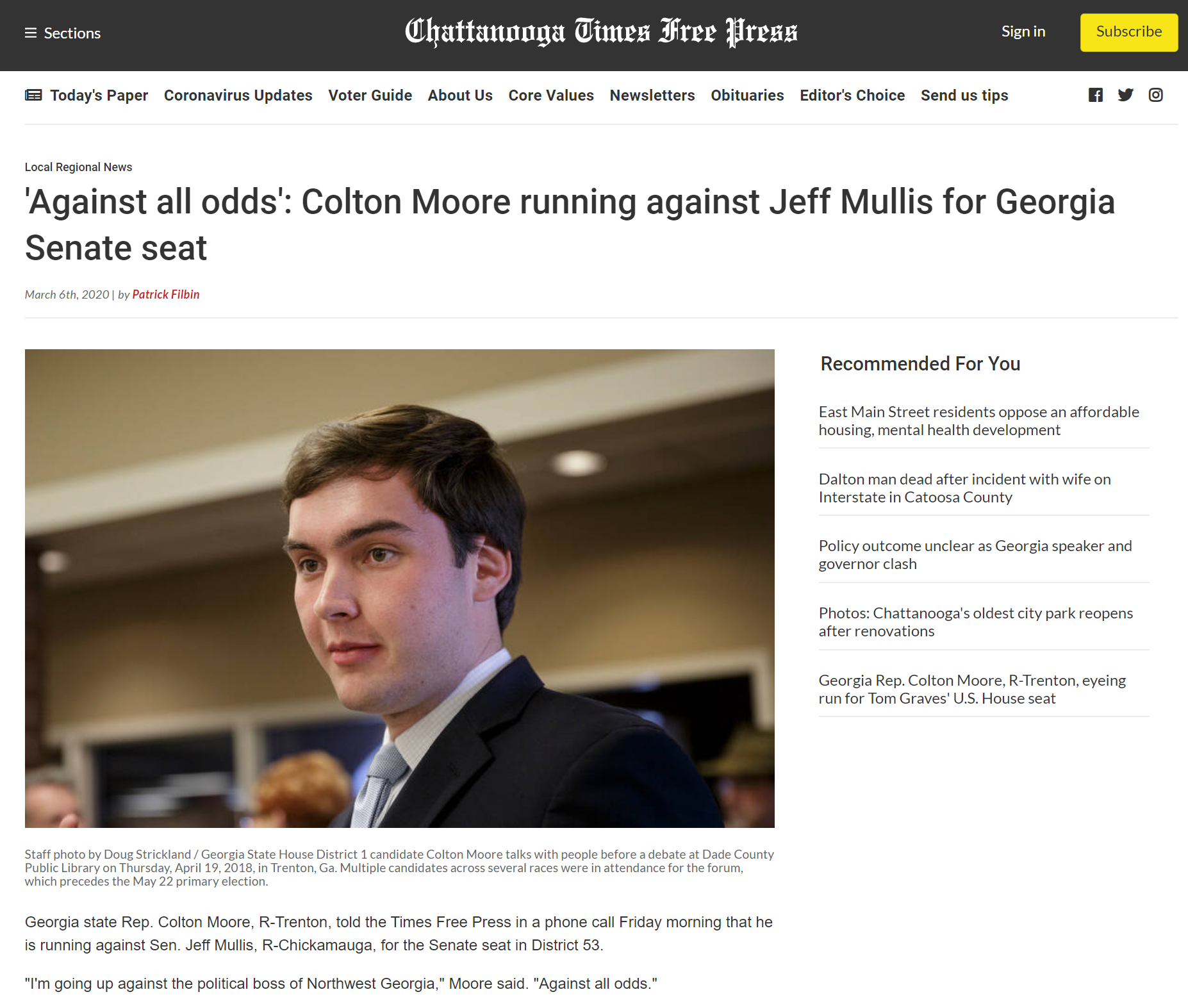 Georgia state Rep. Colton Moore, R-Trenton, told the Times Free Press in a phone call Friday morning that he is running against Sen. Jeff Mullis, R-Chickamauga, for the Senate seat in District 53.

"I'm going up against the political boss of Northwest Georgia," Moore said. "Against all odds."

On March 3, 1779, 238 years ago [] , the first major battle of the British Army’s push into the American South took place at Brier Creek at the old road between Savannah and Augusta. According to Battle and President of the Brier Creek Chapter of the Sons of the American Revolution Craig Wildi, the American loss resulted in the deaths of at least 200 patriots.

Studies done by Battle in conjunction with other professional organizations have uncovered evidence that some of Georgia’s soldiers who lost their lives in the fight for independence may still lie in graves at the battle site.

“This was the 16th bloodiest of all battle sites throughout the Revolutionary War,” Battle said. “We found so many artifacts under our original permit, Georgia DNR (Department of natural Resources) shut the study down.” 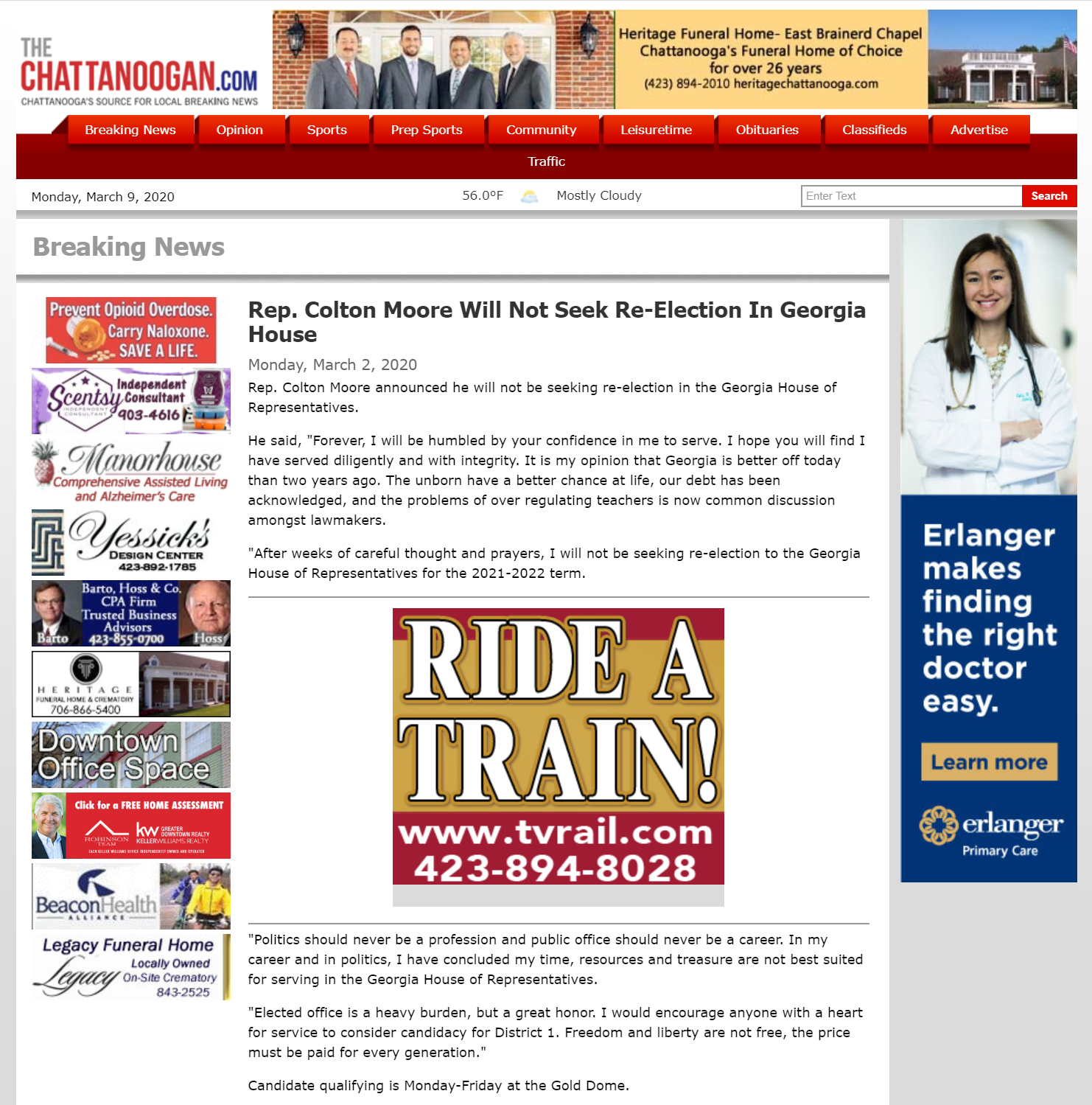 Rep. Colton Moore announced he will not be seeking re-election in the Georgia House of Representatives.

He said, "Forever, I will be humbled by your confidence in me to serve. I hope you will find I have served diligently and with integrity. It is my opinion that Georgia is better off today than two years ago. The unborn have a better chance at life, our debt has been acknowledged, and the problems of over regulating teachers is now common discussion amongst lawmakers. 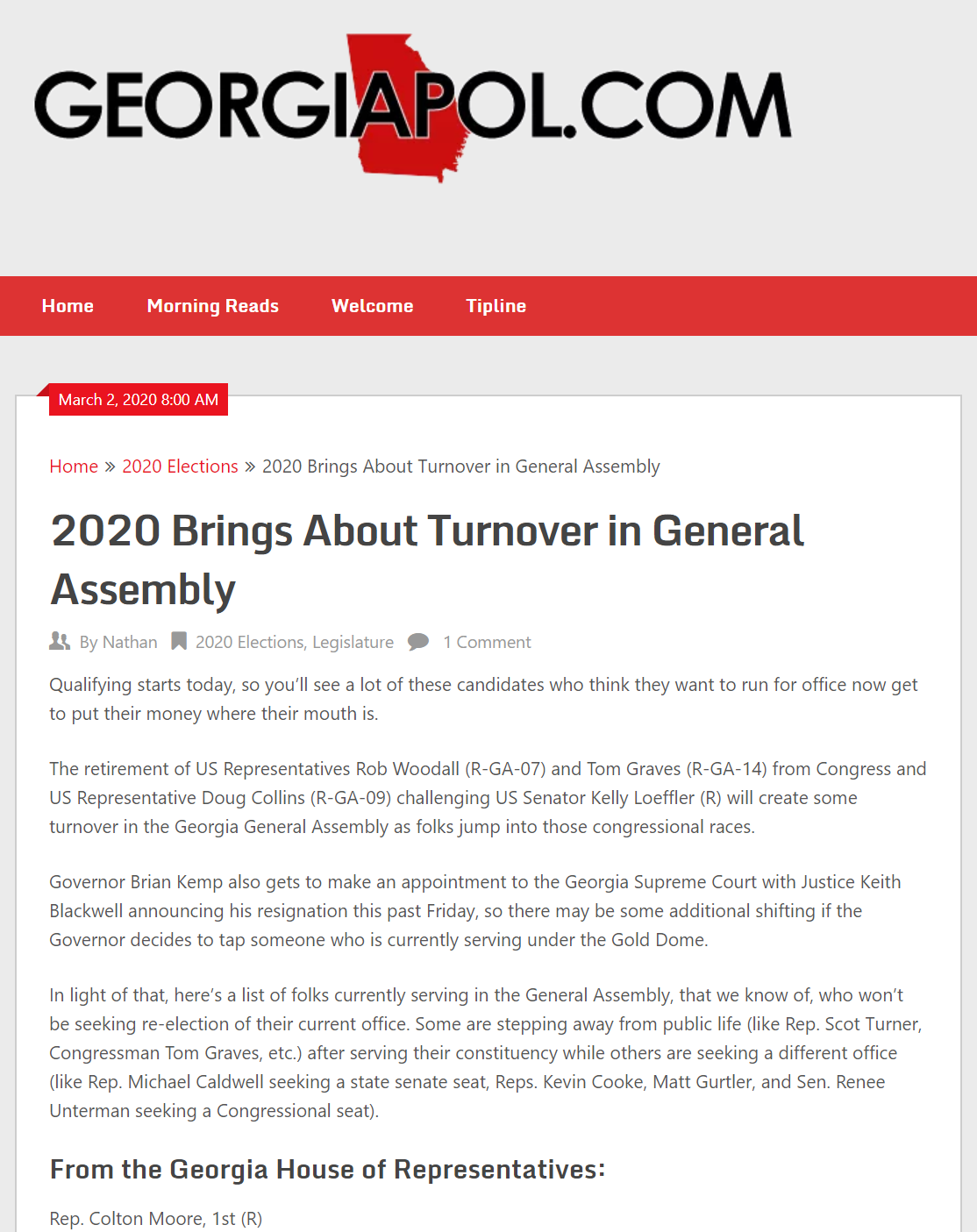 Qualifying starts today, so you’ll see a lot of these candidates who think they want to run for office now get to put their money where their mouth is.

The retirement of US Representatives Rob Woodall (R-GA-07) and Tom Graves (R-GA-14) from Congress and US Representative Doug Collins (R-GA-09) challenging US Senator Kelly Loeffler (R) will create some turnover in the Georgia General Assembly as folks jump into those congressional races.

Governor Brian Kemp also gets to make an appointment to the Georgia Supreme Court with Justice Keith Blackwell announcing his resignation this past Friday, so there may be some additional shifting if the Governor decides to tap someone who is currently serving under the Gold Dome. 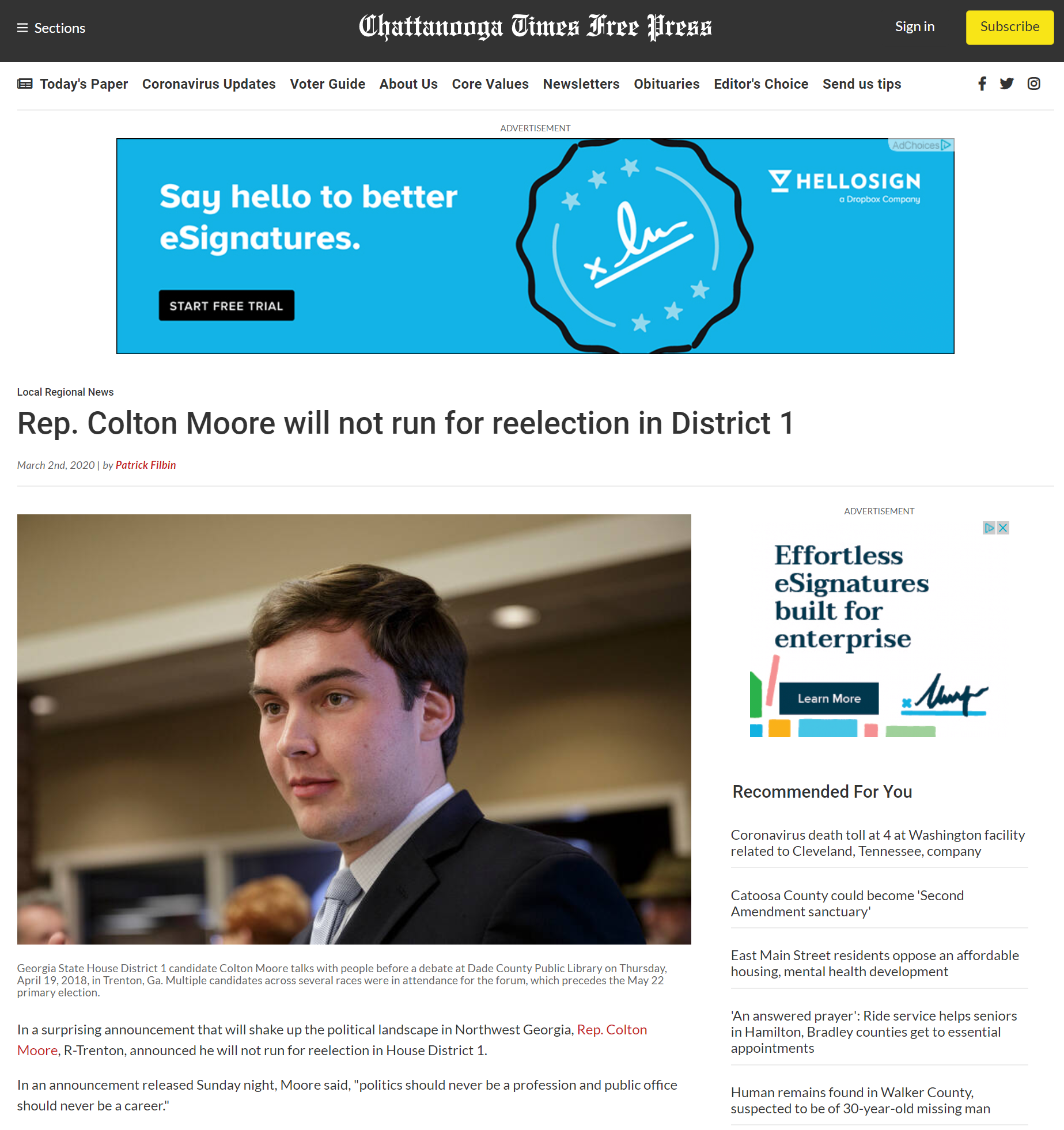 In a surprising announcement that will shake up the political landscape in Northwest Georgia, Rep. Colton Moore, R-Trenton, announced he will not run for reelection in House District 1. 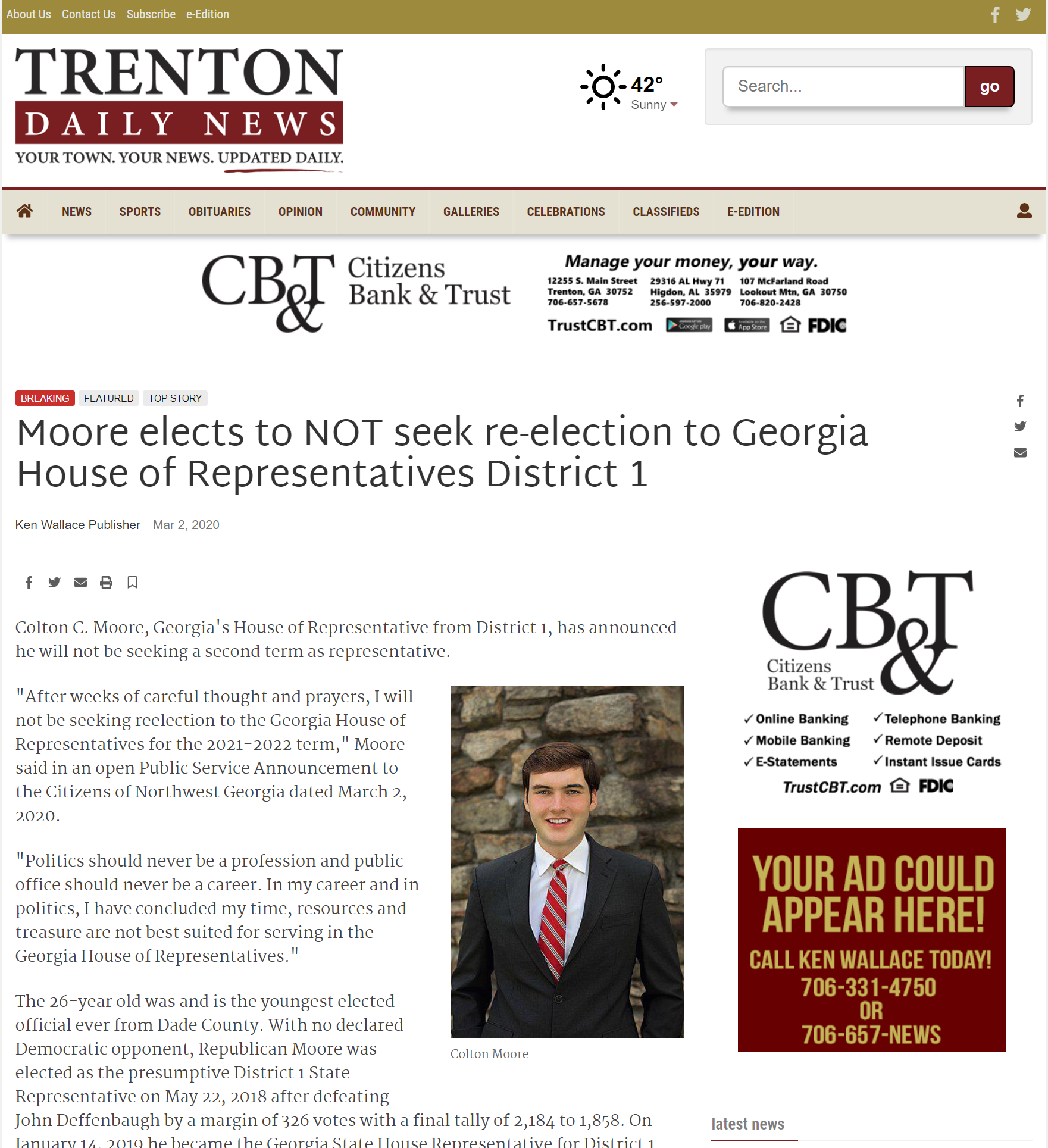 Colton C. Moore, Georgia's House of Representative from District 1, has announced he will not be seeking a second term as representative. 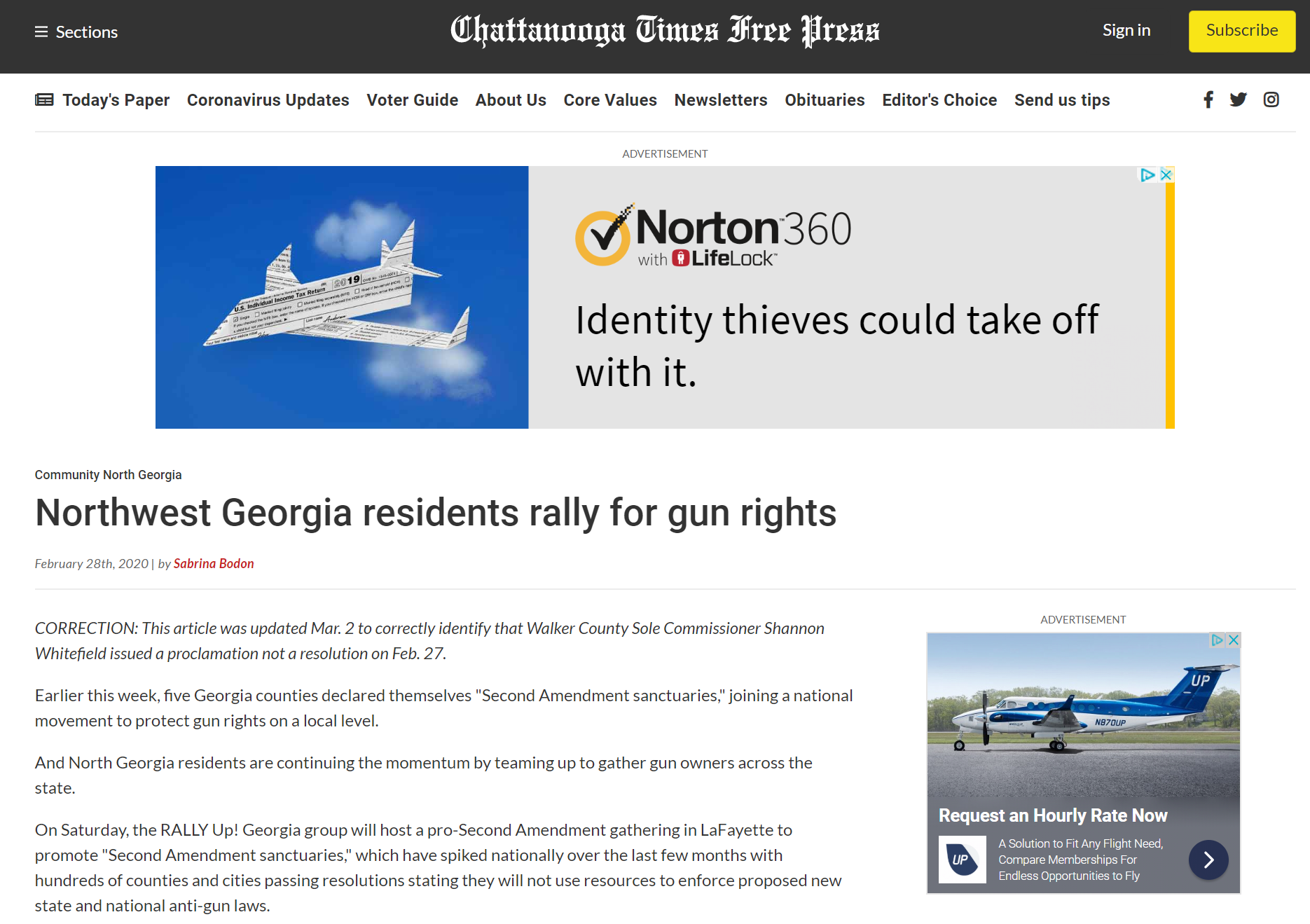 And North Georgia residents are continuing the momentum by teaming up to gather gun owners across the state.

On Saturday, the RALLY Up! Georgia group will host a pro-Second Amendment gathering in LaFayette to promote "Second Amendment sanctuaries," which have spiked nationally over the last few months with hundreds of counties and cities passing resolutions stating they will not use resources to enforce proposed new state and national anti-gun laws. 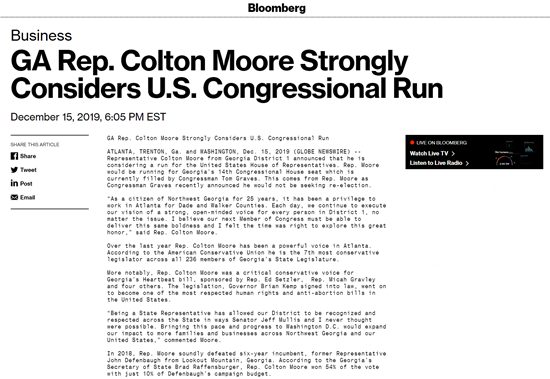 “Each year I traverse the globe selling bulldozers, excavators and cranes at auction. Being a world-class auctioneer, similar to a successful U.S. Congressman, requires an incredible amount of skill, focus and awareness. Over 50% of the legislation Congress votes on involves international affairs. Few politicians have this international experience before arriving in D.C.,”

Moore said. This comes on the heels of the Young Americans for Liberty, led by Mr. Cliff Maloney Jr., featuring Rep. Colton Moore in a video about the Georgia’s state budget. The video has now been viewed nearly 700,000 times.

Capitol Recap: Loeffler and her Dream split on ‘religious liberty’

PAID FOR BY
MOORE FOR DISTRICT 1 COMMITTEE
Close Menu